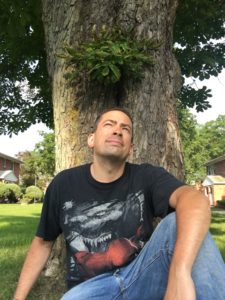 A certain strength of character is required when one considers pursuing an alternative lifestyle; a lifestyle that is against the grain or norm. This had never occurred to me before in all my years of writing and preaching about Minimalism, because I had always taken for granted the fact that I have a very strong sense of “self”, a very strong identity.

It hadn’t occurred to me until recently that there are many people that are NOT very secure in themselves. And how would it occur to me, I was (fortunately) raised by a mother that did a very good job from the beginning of instilling a very strong sense of identity, of self esteem. I just assumed everyone else had it just the same, to the point where I was unaware that it was a concept. It was simply “the way it is” to me.

It occurs to me now that many people just go through life doing what they think they are supposed to be doing. What’s expected of them. They immediately void out any thoughts or feelings they have that are not in line with the “status quo” as waste, or frivolous. They feel inadequate with their own company, and won’t engage in activities unless they have the company of others, especially outside the home. They need the company of others to give them some sense of validation.

They lack security in themselves. They lack a strong personal identity.

In order for anyone to pursue an alternative lifestyle custom tailored to them, a strong personal identity is required. It is required because when one custom tailors a life from unpopular philosophies, they won’t have a lot of support. Sure there WILL be many individuals such as myself that will support someone because we have similar lifestyles to them, but that support will always be greatly outnumbered by the public at large who is resistant to it. So in the end, their ability to follow through rests on the strength of their character. How strong their personal identity is.

Now …… there are many levels of strength we could be dealing with here, so I am not going to draw lines in the sand to illustrate when one is strong enough to pursue an alternative lifestyle. I reckon I’m not even qualified to do that. BUT, I have observed enough people, and their behaviors/attitudes, to determine who is lacking in self security in general. These people have behaviors like:

A person who exhibits any of the above behaviors is likely not strong enough to consider, understand, or follow through with an alternative custom tailored lifestyle.

So raises the question “How can one gain a strong personal identity.”

I don’t have the “one stop” cure for this. I’m sorry. Like I said ….. I was raised with it. Truthfully, I don’t think there is an easy “go to” for this one. It is something each individual need to work on within themselves. Meditation, therapy, and healthy positive environments will help. The only words I can offer someone in need of a strong personal identity are:

You are wonderful. Every thought you have, every emotion you have, be it comical or serious, is important. YOU are important. You have great purpose.

I mean every word of that, and as long as you make yourself repeat it over an over, sooner or later you’ll believe it too.

Spend some time alone. Make yourself laugh. Learn some new skills in your alone time. These things will help.