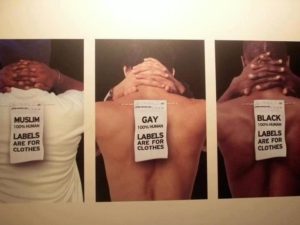 Oh how we love labeling in today’s culture. We do it constantly. We label for all kinds of reasons. Most of the labels we make are simply for the convenience of giving something a name. Otherwise how are we going to convey “please hand me the hammer” if it is not clear what a “hammer” is.

But what concerns me, is the abundance of labeling we do to justify laziness and/or give a false sense of security. I see it all the time.

Lets start by taking the social construct of gender labels. At some point in our history we decided it was not enough that we separate people by their sex, but we needed labels that encompass ALL the character traits that are usually associated with each sex. Once we accounted for these character traits suddenly “male” became “man”, and “female” became “woman.” But what are these traits that caused us to make this jump? Well ….. in general:

WOMAN: Female. Beta. Gatherer and care giver. In modern culture tends to be more colorful than their man counterpart. Relies on intuition, depends on emotion.

Now most of us don’t fall neatly into either one of those descriptions, but they are more or less the hard societal coded definition of those gender terms. And since there are only two, we associate with the one closest to how we identify. I.E. “I am not very logical, and I have many outward emotions, but I still identify as a man.”

The question is ….. do those character traits still associate with those sexes today? Now surely they don’t associate 100% of the time (not even back when the labels were made), but have we evolved to make this binary social convention completely non-applicable, as too many people are far too deviant from both these definitions? I think so.

There are those conservatives that HOLD to this binary standard, and have it so ingrained in the very base of their character, that they don’t realize it’s a social construct. To them “male” and “man” are the same thing.

Then there are those who are a bit more open. They are interested in non-binary standard with a multitude of gender labels, for the wide variety of character types out there.

I am here to tell you that both of these standards are just strait ridiculous and unnecessary. Mainly because they are both rooted in insecurity. The only reason why gender labeling would even be necessary in the first place is to give some sort of sense of belonging. So each of us can feel like we are part of a group. False security in numbers. Validation.

The conservatives are holding on to a system that no longer applies, and possibly never did. They fear their legacy will lose the identities that they hold on to so dearly.

Many of the “non-binaries” are even more insecure, as they are so insecure in their individuality that they need a new labeling system so they can apply a new label to themselves and have the false security of others joining them under that label. “I need to know there are others out there like me, because I can’t stand on my own.”

My name is Anthony Michael Foppiano. I am male, attracted to females, and enjoy wearing lots of colors. I listen to many kinds of music including freestyle dance, Rock, Electronic, Pop, Progressive, and sometimes meditation. I am both logical and extremely emotional (I.E. I lay my flawless logic out, if the party doesn’t get it, or tosses it aside, I FLIP OUT.) I consider myself an Alpha, but let that not suggest I am violent. I detest real life violence (fantasy violence is entertaining), and consider myself a pacifist. I don’t need a gender label to validate me. I require no external validation whatsoever. With all the character traits mentioned above I can stand on my own under the label of the name I already have …… that being Anthony Michael Foppiano.

INTERESTING SIDE NOTE: The inevitable eventuality of the multi-label path (that the “non-binaries” would have us take) is that there will be too many labels for anyone to keep track of and too few people falling under each label. So they would lose the group validation that they so longed for, and would have to stand secure alone anyway. That label might as well be their name. So the non-binary path will ultimately lead to my way anyway. HA!

Gender is an example of labeling because of security. How about labeling to justify laziness?

Diagnosis labels. Humans are obsessed with labeling to avoid action/responsibility. It’s the reason why we so abundantly use labels like ADD, ADHD, PTSD, and Depression. Don’t get me wrong, I believe these are all legitimate conditions. I just happen to believe also that they are over diagnosed, because of laziness. The doctor is too lazy to custom tailor a treatment, so throwing a patient into a general category is convenient. The patient is too lazy to take responsibility for their condition so they slap a label on it that they can learn to live with.

Lifestyle and Race labels are also great examples of labels created for personal security and lazy reasons. And the arguments are similar to the ones above (so I won’t rehash the same argument).

The only reason why my lifestyle of Minimalism even needs a label, a name, is because if I am going to preach about it, the concept needs a name for me to convey its principals. Remember, I was secure in my philosophy of life long before I knew there was a name for it. Long before I knew others practiced it.

The majority of these labels are just clutter for the mind. Walls raised by the fearful.