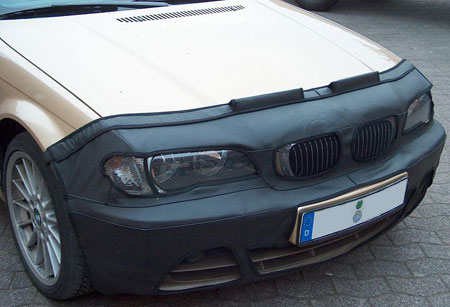 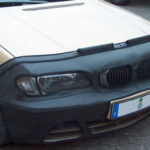 Just this past week I happened to notice in the parking lot of the place I work, a car bra on a nice shiny BMW parked right in front of the building. I couldn’t help but contemplate why someone would possibly use such an accessory. I eventually came to the conclusion that this accessory is completely without actual purpose.

As I understand it, the purpose of the car bra is supposed to be purely cosmetic. It is designed to protect the front end of the car from the elements (dings, nicks, scratches) that will naturally kick up during traffic. This would have to be the purpose of it, as I believe we all would agree that the bra itself is far less visually appealing than the shiny finish underneath. So basically it acts as a shield or mask protecting the cars “good looks.” As the minimalist that I am, I would not be so consumed with cosmetics or fashion so as to purchase one of these for my car (no matter what car I happen to have). But minimalism is not for everyone, or maybe this person is passionate about BMW’s; It is not the fact that it is a cosmetic accessory that caused me to come to the conclusion that it is useless.

What did cause me to come to this conclusion, is the fact that the bra is on to keep something looking good, that we can’t see, just because the bra is on. Is not the reason we have good-looking things in the first place, so we can gaze upon them with some sort of pleasure as their image pleases our eyes. This “car bra principle” makes about as much sense as Brad Pitt wearing a mask all the time because he wants to protect his face from the elements, and keep his face nice and pretty. “Hey Brad. You don’t have a pretty face if no one (including yourself) ever sees it.” And the truth is, those who use a car bra seldom take it off, because it’s too much work to keep putting it on and off.

So why do they have one??? Vanity. Simple, useless, pointless, and ultimately self-destructive, vanity. A person with a car bra wants US to know that they have a good-looking car without actually showing it to us. They are willing to just accept the fact that their car is good-looking, without actually allowing them-self the pleasure of gazing on it. This is pompous.

I have officially labeled ” The Car Bra” as official proof humanities counterproductive ego.

The car bra is without fashion or functional purpose. I am even going to go out on a limb here and say that the owner of a car bra can’t possibly be a minimalist.