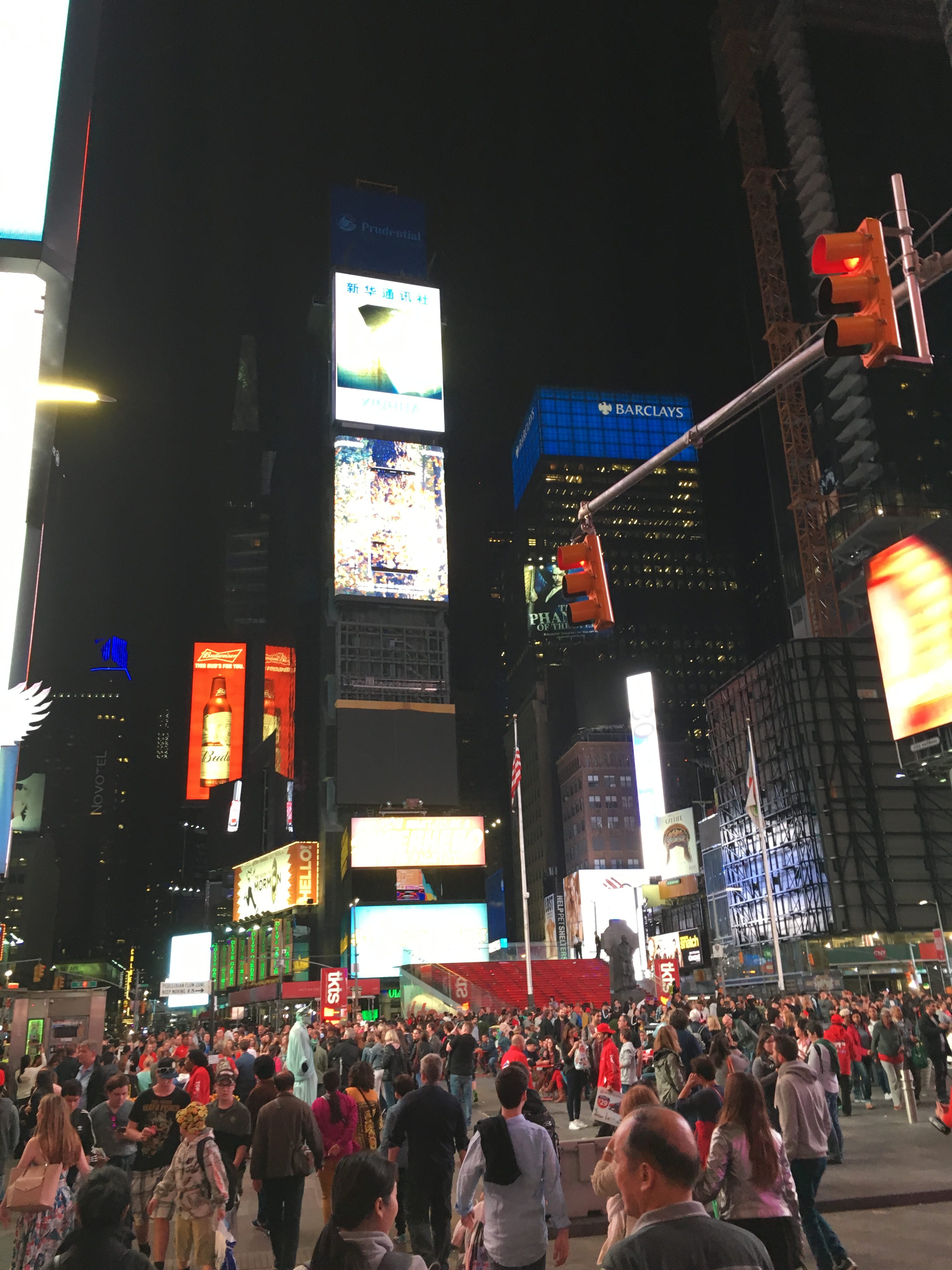 As a father, I very rarely get the opportunity to go on any adult excursions. And for the past three years or so I have been positively dying to make it to NYC. Before my child was born I used to make it down at least four times a year, and for the past five years I have not made it down once; this is of course the price of being a father. Finally, with the construction of the Freedom Tower finished, my interest in doing a city trip doubled, and I decided to make the time. I HAVE GOT TO SEE THE TOWER UP CLOSE AND GO UP IN IT. So I decided to take a two day city trip (2 days, 1 night).

While I would have no problem making this trip alone, this trip also afforded me the opportunity to do something else I really haven’t had the time for: spending some good quality 1 on 1 time with my brother Pete. I invited, and sure enough he was interested and able. Two birds, one stone.

Just as I do with everything in life, I approach even small trips and excursions such as this, as a minimalist (I just can’t help it).

For those of you who have been following my posts, you already know that my last vacation was nearly a week, and I carried only a 2.5’x1’x1′ duffel bag. This one is only two days … soooo all I brought was a backpack. Here are all the possessions I brought (including everything I am wearing at the time of departure): 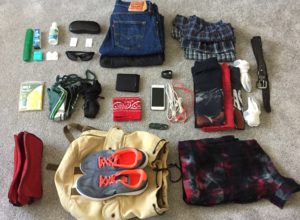 (In order from left to right, top to bottom)

Everything I was not wearing at the time fit easily in the backpack.

Commuting to the city:

As you know I live in the Hudson Valley in upstate NY. So simply driving to the city is not out of the question. It’s only a two hour drive. This might at first seem like the cheapest approach, but that would be dead wrong. Why? Because at the very least, it will cost $40 a day (that is generous) to park the car once it gets there. Oh, and the chances of you finding a vacancy in a convenient lot ……. not gonna happen. There is also gas ($20). There is also the mental energy cost of the anguish I would have to endure driving in the city.

So instead I chose to take the Metro North rail road train down to the city …….. $37 round trip (off peak). It is also quicker than driving as it is exactly two hours, and I am saved the time it takes to find parking. 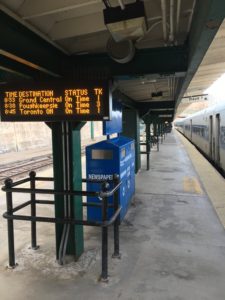 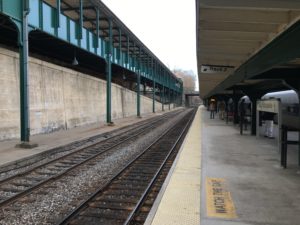 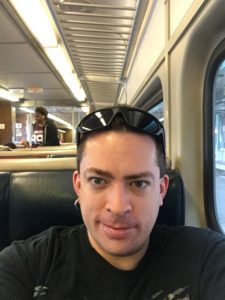 When one goes on vacation, the only reason they even have need for a hotel room is for the purpose of sleeping and prepping. The place need merely be safe, clean, comfortable, and have a fully functional bathroom. THAT’S IT. If one is doing this right, they won’t be spending much time there. Vacations happen outside the hotel, right?. In the past I have always been perfectly comfortable with economy lodgings (Days Inn, Econolodge, etc). It’s no different in this case, however we are talking about Manhattan here. And even the “economy” hotels here charge an arm and a leg per night for middle class folk such as myself.

Well it just so happens that I stumbled upon a hotel ideally suited for minimalists. It is called a POD Hotel. There are in fact two of them in the center of Manhattan; the POD 51 and POD 39 (51st st and 39th st). What these are, are rooms smaller than half the size of a normal hotel room at a significantly lower price. Pete and I stayed in a room no wider than my arm span (not considering the bathroom) and maybe five~seven  yards deep for only $135 a night (after tax). 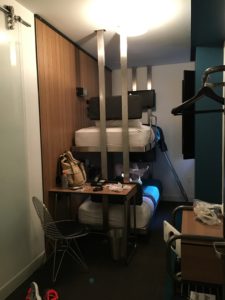 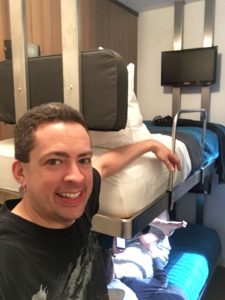 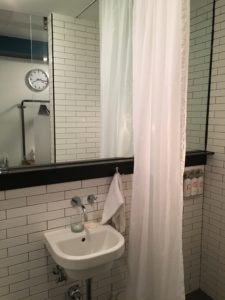 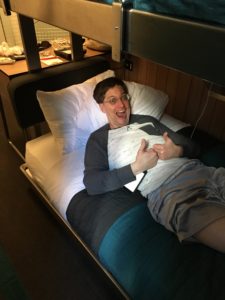 The pics above depict the entire room, a set of bunk beds, small desk, a safe, a coat rail, ……. and that’s it. Well, there is the separate tiny bathroom that is very minimal itself. That last pic is my brother Pete being a goof.

Like I said, we got this at $135 a night, or $120 before tax. It is however possible to get a room as low as $90, but having ones own bathroom is not guaranteed (some rooms have shared bathrooms).

For those of us minimalists who don’t even require all that, hosteling is always an option. There are plenty of hostels all over the city with rates as low as $40 a night. Sometimes all ya need is a bed. 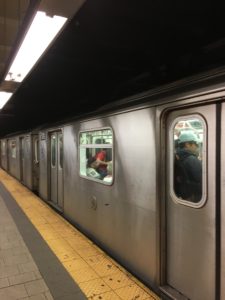 Put simply, the most efficient means of transportation in Manhattan is Subway if traveling north/south, or by foot if east/west. The island of Manhattan is 2.3 miles wide at it’s widest point, so walking east/west should not be a problem for most people and situations. The island is however 13.4 miles long, so that can be a bit of a problem by foot. Presently it is $2.75 to gain one admission into the subway. The distance one needs to travel is irrelevant to the cost. Simply entering a taxi comes with a $3.00  charge before distance is even considered (which it is). So taxis are drastically less cost efficient.

One new means of transportation in the city that I have not yet had the opportunity to take advantage of is the city-bikes; bicycles for rent at any city-bike stop location, which are all over the city. As a cyclist I am particularly interested and fascinated by these, as I love to bike in the city but don’t want to risk one of my own bicycles. Well ….. maybe next time.

Events (“Finally he gets to the fun part of the vacation”):

I was only staying for two days so I just came up with only a handful of activities I planned on doing when I was down there (Which included the Freedom Tower tour of course). I prefer not to jam pack my time filling up every minute with pre-planned events. First, all this does is set one up for disappointment when they miss something (and they almost always do). Second, they will enjoy everything a lot less with one eye on the clock all the time. Third (and most important), It closes ones mind and vision off to other possibilities and sights that present themselves while the excursion is taking place. I.E. You’re not going to notice all the peripheral beauty around you if you always have one eye on the clock.

The first day there was the most unpredictable with regard to just about everything (arrival time, city navigation, etc), so I only planned one event. TIMES SQUARE 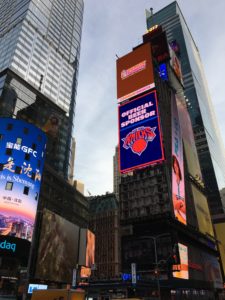 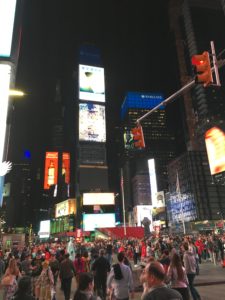 Times Square, ah yes, the pinnacle of marketing and consumerism. Not usually a popular spot for a minimalist, but I just so happen to get a kick out of watching the lights and bustle, live and in motion. While I do not take part, I do enjoy watching the excess consumerism at work. The street shows are great too. After some sight seeing, we met up with an old friend and went to the Bourbon Street restaurant just off of Times Square. Jambalaya!

That was the entire first day. Simple, easy. I dare not shop in TS because the prices are super inflated. Even the food is. This was not the spending part of the vacation.

The second day on the other hand was less prone to delays beyond my control, so I packed more events in. I also spent the day in downtown where the culture is much richer, and merchandise and food are much more affordable and authentic.

The day started with a cruise through Chinatown. I had never been there before, so this was a real treat. We checked out everything. I really like to immerse myself in the culture. I was fascinated by the food stands with exotic ….. things (not sure if some of it was roots, fruits, or veggies). We saw dried sea life carcasses. The avenue reeked of fish. Apparently sea cucumbers are either rare, or hard to get because they are $48/lb.  We went to a fish market that had all the fish still alive in tanks. Fish doesn’t get fresher than them killing it right in front of you before they wrap it up and hand it to you. I’m used to the grocery store, where you see the fish already dead on ice. 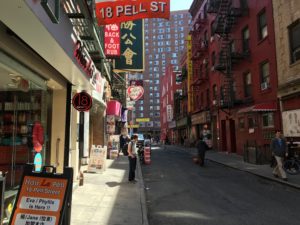 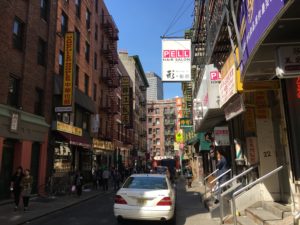 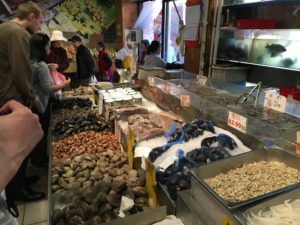 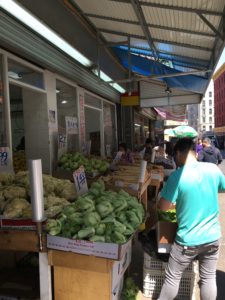 I did end up making a couple purchases from one of the stores. A pair of high quality chopsticks and two pair of trainer sticks for my daughter to practice with.

After we had our fill of the Chinatown sights, we stopped at the Nom Wah Tea Parlor for some Dim Sum. I had a pork and onion stuffed bun and pork dumpling soup. Delicious, and under $10. The tea I had was another $4 though. Still, cheap.

Next was the big event of the trip. The Freedom Tower tour. I believe the tour took us 102 floors up. The tour was $37, and included a just a brief lesson on World Trade Center history, and tower construction. All good stuff, but I was in it for the 360 degree visibility on the top observation floor. On which we could see as far as four boroughs and New Jersey. 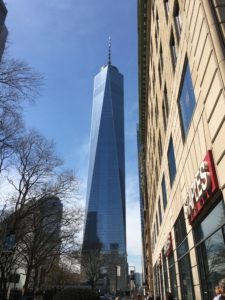 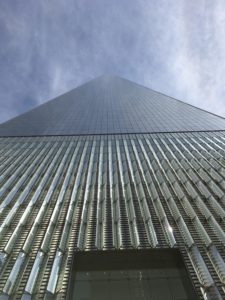 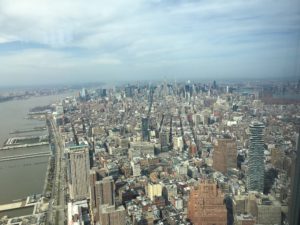 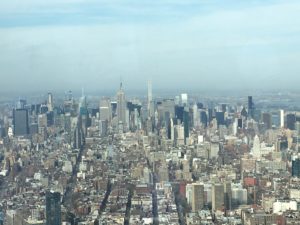 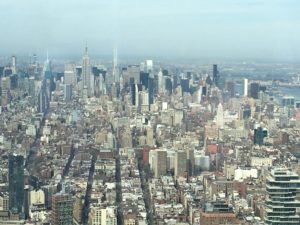 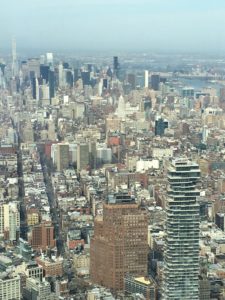 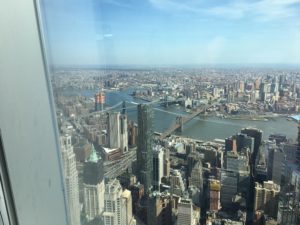 These pics above are just a few of the sites we took in. There is nothing like viewing humanities abundance from above/afar, all in one big cluster. It was breathtaking.

Pete and I closed out our trip with some authentic German brew at a place in midtown called Zum Schneider. A Restaurant and Beer Garden. Pete and I shared a 12 beer tasting rack (about 2 oz of each beer). I indulged in a cheese and deli meet spread for my meal. 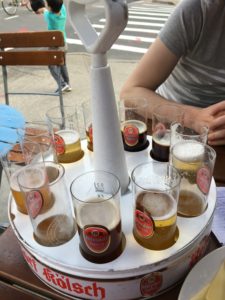 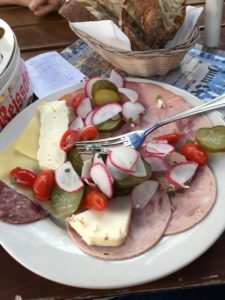 And there it is. An excellent city trip minimalist style. I spent no more than $300 altogether. I wasn’t even trying to keep a low budget. If one just makes it a habit doing minimalist practices, one can still have just as good a time without going home broke.