Skip to content
Always I hear people say “It’s an expensive hobby”, no matter what their hobby is. It could be something as financially simple as being a Chess Player/Enthusiast.  One would think simply having a couple Chess sets was enough (one for home and one for travel), but NO. It’s only a matter of time before they purchase a genuine marble chess set, a gemstone one, and a whole bunch more that they seldom or never use because they are too precious. And then of course there are the volumes of literature on the game that are “must haves”. Computer games ……. I could go on, but I think the point is clear. 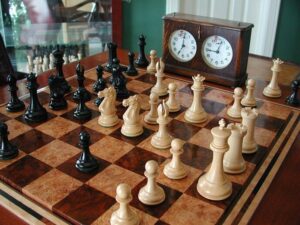 Hobbies/Passions become financially demanding when the act of DOING the hobby is no longer enough to satisfy. Then we are motivated to escalate the hobby to a level where we need more stuff to get the same old thrill we used to get (It’s a type of addiction). After a while it’s not even about the thrill of the experience anymore, just the beautiful artifacts associated with it. When this happens we become collectors instead of experiencers.
More Examples:
When riding a bicycle doesn’t give us the same thrill as it used to, we buy more bikes to keep the passion alive.
When the ROAR of the engine in our 72 Dodge Charger no longer gives us goosebumps, we sell it and build our new vehicle. How long till that one doesn’t satisfy?
“Now after I’ve spent large amounts of time and money to build a large deck behind the house, we’re never motivated to use it. AH, but if that deck had a hot tub, we’d use it! ……. (I think).”
The way to fight this human addictive tendency is to cultivate gratitude. With gratitude every bicycle ride feels like freedom. With gratitude the 100th start of the engine will feel just like the first. With gratitude, we will sprawl out on the deck and look into the sky with a shit eating grin and say “this is my castle”. With gratitude comes the realization that Chess is not about the pieces, it’s about the game.
Hobbies/Passions are as costly as we want them to be.