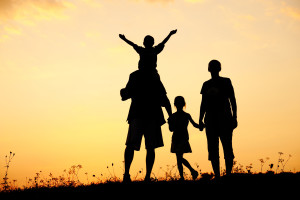 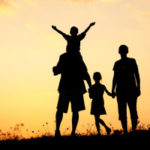 The majority of my memories as a child with my father were that of me looking up at him while he lectured me. Don’t get me wrong, most of that he said was insightful, and I learned a great deal; but that doesn’t exactly make for a strong bond. Why, because a person who looks down at you while giving you direction asserts them-self as your superior (whether that is their intention or not). Unfortunately human nature dictates that the person down below looking up will feel intimidated (especially for a child) and close them self off from the aggressor.  Even if the one below is enlightened by what the aggressor is offering. People only let down their guard to let others in when their approached as an equal. When they are approached at eye level.

Unfortunately that was the way of American generations past. The role of the father was to be the income, the livelihood of the family. It was his job, and his job alone to make sure there was food on the table and a roof over their heads. This responsibility took a great deal of time for many men. So much time in fact that by the time he came home from work, he was exhausted; a quick meal then bed. Beyond that his job was to be the disciplinarian. …….and that was it. It’s all there was time for. And it’s all he knew how to do.

It was the mothers job to raise the children. Feed them, bathe them, teach them, and yes play with them. As a result, it was the mom that formed the strong bond with them.

In modern times this is very different though. Both women and men are in the workforce and as a result they have to split the family duties. And truthfully that is not the only reason for the change. We are more educated now in child development, and as a result fathers can be more involved in their children’s lives. A father can now have the added role of being a daddy. This is a role I take very seriously, and is probably my favorite role to play. But even in these modern times, I still see many fathers not really filling the daddy role.

So to those fathers I say this: Be a daddy, not just a father. Get down on the floor and play with your child; Meet them eye-to-eye. That is how you bond with them. If you don’t, you will lose them. You will never establish a warm bond with them. Do it while they’re young as it is much easier then. The longer you wait, the more difficult it is, and eventually it will be too late.