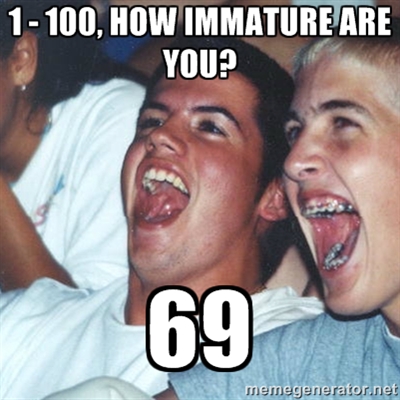 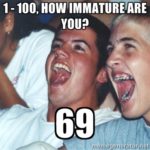 All my life people have told me how I am “immature.” From middle school, all the way through adulthood. I am now 37 and I still hear it on occasion. It makes me wonder what people’s definition of maturity is. According to Webster immature means “Not fully developed or grown.” and “Acting in a childish way: having or showing lack of emotional maturity.”

I believe I fit the profile of a mature adult. I have held a full-time job for my entire adult  life, and have gained much respect professionally. I own my own home. I am a husband and a father, and have done well in these roles. I maintain healthy adult relationships with family and friends.

I have noticed that people only say this to me (and others) when I (we) say something that can be considered shocking, funny, and inappropriate (by whatever ridiculous standard of appropriateness the behavior is being measured against). While this behavior is not always desired, interestingly it does not quite fall into the definition of “immature.”

There are many out there like me. People who speak their minds. People who will make absurd, and ridiculous gestures for a laugh. People who involve themselves in games and activities that serve no other purpose than mental exercise and entertainment.  People who love sci-fi/fantasy, and treat it as its own sub reality. We have been called nerds, geeks, dweebs, rejects, spazzes, and dorks. I am perfectly fine with all these names. I am not fine however with being called “immature.” Personally I just think we should be called “fun”, because that’s exactly what we are. Perhaps that’s the meaning that normal people are giving to the word “immature.” Immature = fun. It all makes sense now. Particularly since the people who use the phrase “You’re so immature” obviously consider themselves very mature. And they are right, they are mature. They are very … very … boring.

As we grow into adulthood, we learn how to live and adapt to survive. But that is not the same thing as what they would have you believe “maturing” is. It is my opinion that maturity is just another fictitious concept people have created to draw a line in the sand regarding conformity.

One Reply to ““You’re so immature””