Every now and again I find myself amused when I incidentally receive a pearl of wisdom from a surprising source. Here are some many of us have received and maybe not given deserved thought to them:

You may recall “The Lego Movie”. This song was the theme song for it, and it was an overnight (if only temporary) success. Of course it was, any song with a positive message has a way of imprinting on people. A simple phrase like “everything is awesome” spoken with enthusiasm has a way of being a catalyst to put people in a better mood; to put away their problems for a minute and see the beauty around them. Say it, then believe it, then soon we see the truth of it.

“No matter where you go, there you are”

This phrase is from an old Sci-Fi movie called “The Adventures of Buckaroo Bonzai Across the 8th Dimension”. The phrase is spoken only once in the entire cheesy movie, and it didn’t make much sense in the moment it was spoken. Nevertheless it is one I have held on to my whole life. I first heard it when I was very young and it didn’t mean anything to me then, but it started to take on meaning for me as I matured. It means: Our problems our inside us, not in the circumstances around us. Also, our solutions to those problems are inside us as well.

I’ve known too many people that try to resolve their problems by moving away, as they believe that the source of their problems is where they live, their city/community/town. The problem is, after they have moved and are living in a different environment, it doesn’t take long for their problems to follow them. Here is when the phrase applies “No matter where you go, there you are”.

“Ain’t nobody got time for that!”

This one comes from an old news broadcast where a citizen (her name was Sweet Brown) was speaking about a fire that blazed in her apartment complex. It was hilarious to say the least. I have placed the link right HERE. The phrase “ain’t nobody got time for that” caught on like wildfire. Me …… I happen to believe it’s a pearl of hidden wisdom (I may be alone here). I use that phrase a lot now. In a world where the news you hear is mostly fake and has no effect on our daily lives anyway. In a culture that influences us to covet things, care about the personal lives of celebrities, and spend excessive amounts of time on cosmetics to project an attractive image, the value of “Ain’t nobody got time for that” is beyond obvious to me.

Those who are from my generation need no explanation about where this phrase came from. For the rest of you, it comes from “Bill and Ted’s Excellent Adventure”. This may be one of the biggest pieces of wisdom I have ever heard. The most positive message ever, and it has been presented to us by a couple of morons.

I would be interested in hearing some incidental pearls of wisdom some of you have picked up from unlikely sources. Please comment.

Rainbows are a lot like ALL things of beauty. The closer we get to them, the more we try to possess them, the less beautiful they become. In the case of rainbows, they just disappear altogether.
Have you ever tried to chase a rainbow? Maybe find one of the ends? It’s impossible.
I recall once as a young man driving to find the end of one. No luck. It landed me in the middle of a field looking up and not seeing the rainbow at all. So I drove away. Once I got a distance away, all of a sudden I could see the rainbow again. It then occurred to me that I WAS at the end of it. I just couldn’t see it. You can’t SEE it when you’re in it.
Beauty can not and should not be possessed, it must roam free. We must learn to be content appreciating beauty where it is, and from where we stand. 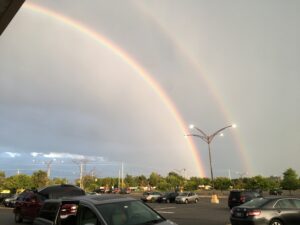 We can’t be better unless we try something new.

This action doesn’t have to be grand. It can be tiny. As tiny as:

Not only does taking a small uncomfortable step give us the courage to take a bigger step next time, BUT it also potentially exposes us to new ideas, new possibilities. Yes, even the smallest of actions can do that for us.

We should do one thing every week, one small thing, that makes us feel uncomfortable. Do this every week, and in just a couple months time we will see a difference in ourselves.