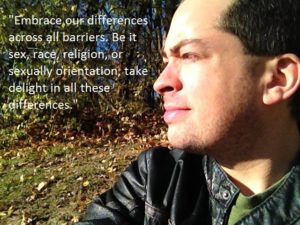 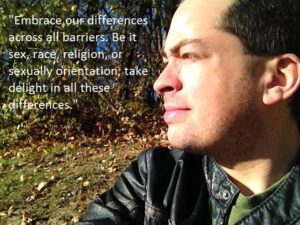 I can write plenty about why we should embrace our racial, religious, and probably even sexual orientation differences. But I am sure it is not anything most of us haven’t heard before. So instead I will write about how rich and wonderful the differences in the sexes are, as I have never heard many people broach this subject before, and it’s a topic which I have a lot of affection for.

I remember as a boy hearing my mom saying “Ahhhh the differences” usually when she saw men doing “men things” and when she saw women doing “girly things” (as she described it). She took delight in observing sex specific behavior. She would be just as delighted as I was when she would buy me whatever new cool mechanical/electronic/weird toy came out. She would often watch me play very closely, with a big smile in her face, and she would say things like “boys toys are so much cooler than girls toys.”

On the other hand, she would also later on in my life (teenage years) delight in the behavior of girlfriends I had, and she would like being all “girly” with the girls. On more than one occasion, in my 20’s she would grab a tub of ice cream, bottle of wine, and hang out with my girlfriends; she told me to buzz off because it was girl time.

My mom was a firm believer that men were men, and women were women; That men and woman were very different creatures mentally. But more than anything, she believed that this is an absolutely wonderful thing. That although men and women don’t always understand each other, and or even communicate well, a man and a woman together in love are greater than the sum of their parts. That the way they compliment each other is amazing.

As I have matured to adulthood, I began to understand her affection for “The differences in the sexes” and I now share that affection. I enjoy watching my wife and 4YO daughter get manicures and play “dress up.” It’s just so endearing to me. I enjoy brushing my daughter’s hair, and telling her how beautiful she is. I enjoy holding my wife in my arms and telling her that she is my world. My girls are girly girls, and I wouldn’t have it any other way.

My message to both men and women is this:

I know it’s tough to make a relationship work.  Men and women are different in every way, so it may seem like you can never come to an understanding. Well I am here to tell you that you are missing out if you don’t try your damnedest to work it out.

Men: Do you think that she is irrational, and overly emotional? Maybe so. Well just remember that it is with that same unbridled passion that she gave her heart to you. Can you say that your love for her is so wild and free (I didn’t think so).

Women: Do you think that he is “pig-headed”, and won’t listen to a damn thing you are saying. That he is not making an effort to see your POV. Maybe true. But just remember that it is with that same steadfastness that he laid down the foundation for your home. He is your rock, your mighty oak; Immovable and reliable.